Thank you very much to your interesting with our Blog news as always.

In the previous blog, we introduced you some of UNESCO heritage in Vietnam. In this blog, we would like to introduce one more special heritage that you should not missed when visit Vietnam.

Through many changes and ups and downs of history, Thang Long - Hanoi still retains valuable historical and cultural relics, unique cultural values, old villages, bold traditional craft villages. Vietnamese culture. In which, the Imperial Citadel of Thang Long is an extremely valuable heritage of the nation, a testament to the heroic history of Thang Long - Hanoi. 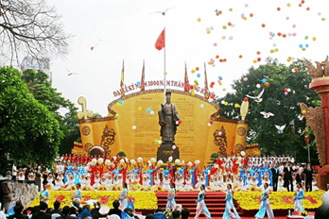 Complex of Hue Monuments lies along the Huong River in Hue City and some adjacent areas of Thua Thien Hue Province. Hue City constitutes the cultural, political and economic centre of the province, and was the old imperial city of Viet Nam under the Nguyen Dynasty from 1802 to 1945.
Visitors can see historical sites, temples and pagodas. UNESCO recognized it as world heritage in 1993.
The historical complex is known not only for its rich architecture but also for beautiful landscaping. Overall, the site is quite stunning. Avoid Hue between October and December as it gets most of its rain from the northeast monsoon during that period. This small city is also famous for its Imperial-style cuisine. Don’t miss it.

The other heritage sites recognized in 1999 : Hoi An Ancient Town and My Son Sanctuary. Both sites are located in Quang Nam province. The ancient city of Hoi An today is a special example of a traditional urban port in Southeast Asia. The ancient architectural features seem to remain intact in each roof, on each street of Hoi An.

One of Vietnam's most iconic attractions, Hoi An's Japanese covered bridge dates back to the 18th century and is a beautiful historical piece of Japanese architecture.

Hoi An will captivate visitors by its timeless beauty, extremely rustic and simple.